Thank you for reading!

Starting at
$1.00 for 1 day
Get Started
View all rates

If you already subscribe to our print edition, use your account number to sign up for FREE access to our online edition AND our e•edition. Thanks for reading The Rockport Pilot.
Free access for current print subscribers
Get Started
You have permission to edit this article.
Edit
Home
News
Sports
Obituaries
Opinion
Business
People
e-Edition
Marketplace
Classifieds
1 of 3 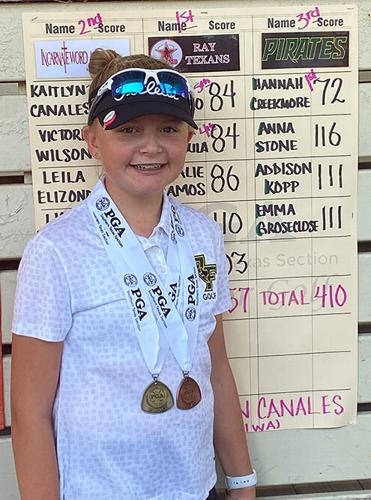 Rockport-Fulton High School freshman Hannah Creekmore stands in front of the score sheet at Palmilla Beach Resort where she shot a 72 for the lowest individual score in the tournament held Feb. 21. She has led the Lady Pirates in every tournament this year. The Lady Pirate and Pirate golf teams play in the district tournament this Thursday and Friday. See story page 7A. 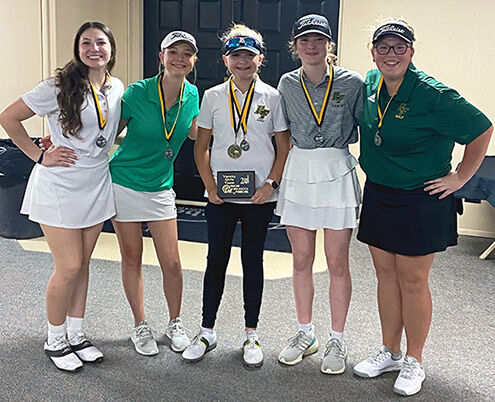 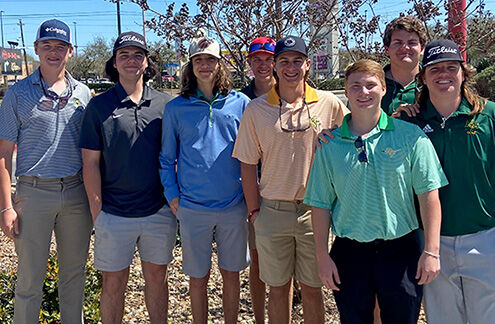 Rockport-Fulton High School freshman Hannah Creekmore stands in front of the score sheet at Palmilla Beach Resort where she shot a 72 for the lowest individual score in the tournament held Feb. 21. She has led the Lady Pirates in every tournament this year. The Lady Pirate and Pirate golf teams play in the district tournament this Thursday and Friday. See story page 7A.

The Rockport-Fulton High School (RFHS) Pirate and Lady Pirate golf teams will play for the district championship next week in the 26-4A district meet Thursday, March 31 and Friday, April 1 at The Club at Colony Creek course in Victoria.

Both teams got in another round at the course during their district preview Wednesday, March 23.

When they play in the district tournament next week, it will be their third time playing there this season.

The Pirates hope to put together their best two days on the course for the district meet.

RFHS Head Girls and Boys Golf Coach Harold Busack said the boys have made significant progress throughout the season.

Their best finish this season was 4th place during a home meet Monday, Feb. 14.

Kenner McBurney is the Pirates top shooter. His best score this season is a 93.

Taylor Hoover, Gavin Henkhaus, and Brian Cunningham have also been consistent performers for the team.

The Lady Pirates hope to contend for the 26-4A district title next week. The team has had multiple top three finishes this season.

After a third place finish at River Hills Golf Course in early February, the Lady Pirates have placed second as a team in three different tournaments; once at home, one at Palmilla Beach Resort in Port Aransas, and again at Hatchbend County Club in Port Lavaca.

Freshman ace Hannah Creekmore has led the Lady Pirates in every tournament this season. Her best outing was shooting a 72 individually and winning the tournament at Palmilla Beach Resort. She’s also won individually at Hatchbend, placed second at home, and second at River Hills.

Busack said Creekmore has played an outstanding season and is excited to see what she does in future tournaments.

Behind Creekmore is a group of upperclassmen who have consistently performed well throughout the season.

Sophomore Emma Groseclose and freshman Addison Kopp are two underclassmen who have also been playing very well behind Creekmore.

Busack said the Lady Pirates have a very good chance to make it out of the district as a team. If the team qualifies to the region meet, Busack said regionals would be at the same course as district. He said their familiarity with the course will hopefully be an advantage for them.

Welcome to the discussion.

Keep it Clean. Please avoid obscene, vulgar, lewd, racist or sexually-oriented language.
PLEASE TURN OFF YOUR CAPS LOCK.
Don't Threaten. Threats of harming another person will not be tolerated.
Be Truthful. Don't knowingly lie about anyone or anything.
Be Nice. No racism, sexism or any sort of -ism that is degrading to another person.
Be Proactive. Use the 'Report' link on each comment to let us know of abusive posts.
Share with Us. We'd love to hear eyewitness accounts, the history behind an article.