Thank you for reading!

Starting at
$1.00 for 1 day
Get Started
View all rates

If you already subscribe to our print edition, use your account number to sign up for FREE access to our online edition AND our e•edition. Thanks for reading The Rockport Pilot.
Free access for current print subscribers
Get Started
You have permission to edit this article.
Edit
Home
News
Sports
Obituaries
Opinion
Business
People
e-Edition
Marketplace
Classifieds
1 of 2 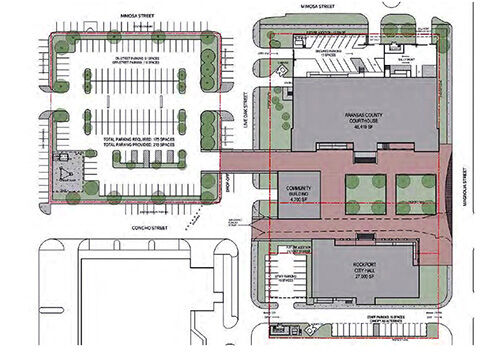 Proposed plans for the exterior look of the new Rockport City Hall, bottom photo, are similar to that of the proposed Aransas County courthouse, which was featured in the Wednesday, July 15 edition of The Rockport Pilot. The courthouse, city hall, community building, and Celebration Plaza, as well as parking areas are shown in the proposed site plan, top.

Proposed plans for the exterior look of the new Rockport City Hall, bottom photo, are similar to that of the proposed Aransas County courthouse, which was featured in the Wednesday, July 15 edition of The Rockport Pilot. The courthouse, city hall, community building, and Celebration Plaza, as well as parking areas are shown in the proposed site plan, top.

The Rockport City Council, at its regular meeting Tuesday, July 14, heard an update about the proposed new city hall, which is part of the Downtown Anchor Project (DAP). The DAP will include a new city hall, county courthouse, community building, and public plaza, tentatively called Celebration Plaza.

(Note: PGAL was selected by the city and county to design its respective facilities so they have a similar exterior look, and so economies of scale can be realized. The current plan is to have the courthouse facing south, on the north side of the block to the east of the former courthouse, and city hall on the south side of the block, facing north. The plaza area will separate the two buildings, with the community building located on the west end of the plaza.)

Bonnette showed rough floor plans of the proposed two-story city hall, which will be just less than 27,000 sq. ft.

“We have gone over space requirements (and placement) with the mayor and department heads,” said Bonnette.

It was noted the city is in good shape financially due to the way it has allocated its funds, including the recent vote to post/publish notice of intention to issue certificates of obligation (CO) to finance various public improvements. The council took that action at its June 23 meeting.

City Financial Advisor Bob Henderson of RBC Capital Markets, at the June 23 meeting, said the city could borrow $20 million with minimal impact on the Interest and Sinking (I&S, or debt service) tax rate in the 2020-21 fiscal year.

The city has made significant inroads in paying down its current debt, which has resulted in a projected lowering of the I&S tax rate in the 2020-21 fiscal year (prior to issuing the new debt).

The projects proposed for funding with the $20 million CO issuance include $11.77 million for the new city hall.

Mayor Pro-tem J.D. Villa said he was hoping for a “more unique” look.

“When I see this, I see the federal courthouse in Corpus Christi,” he said.

He added that isn’t a deal breaker, but he had to share what he first thought when he saw the picture.

Councilwoman Andrea Hattman concurred, adding, “When you travel around you see things that are unique.”

Bonnette said those concerns can be addressed, but added, “We wanted (the city hall) to be similar in design with the courthouse.”

He also noted the proposed layout and design is unique, when compared to other cities, because the courthouse and city hall are located across from each other, separated by the plaza, and look out over the water.

Bonnette said design work for the community building and plaza have not started, and those are areas where unique features can be implemented.

County commissioners addressed the courthouse design the day before (Monday). The proposed new facility was also the topic at a public hearing Tuesday afternoon.

“One of the conversations in the county meeting was flipping the site plan (placing city hall on the north side, and the courthouse on the south side, to be better position the courthouse next to the Aransas County Detention Center),” said Councilman Bob Cunningham.

Mayor Pat Rios said city and county officials talked about that option previously, but doing so would encroach a large stormwater drainage main.

“I mentioned it and they weren’t interested at the time,” said Rios. “If they want to look at it (flipping the site plan) again, we can, but it would be a cost to them.”

Cunningham said he likes the overall site plan, leaving it open to the water to take advantage of the natural breeze.

No action was taken regarding the rough plans for the new city hall.

Welcome to the discussion.

Keep it Clean. Please avoid obscene, vulgar, lewd, racist or sexually-oriented language.
PLEASE TURN OFF YOUR CAPS LOCK.
Don't Threaten. Threats of harming another person will not be tolerated.
Be Truthful. Don't knowingly lie about anyone or anything.
Be Nice. No racism, sexism or any sort of -ism that is degrading to another person.
Be Proactive. Use the 'Report' link on each comment to let us know of abusive posts.
Share with Us. We'd love to hear eyewitness accounts, the history behind an article.

Sorry, there are no recent results for popular images.

Do you believe the politicization of the COVID-19 pandemic and crime on the streets in major U.S. cities will end immediately after the November Election?